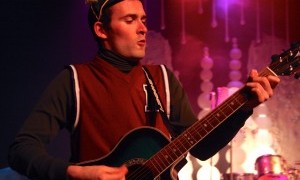 A reindeer not interested in pulling a sleigh, a jazz penguin too cool for the South Pole and a polar bear feeling blue because of global warming, this is a Christmas show with a musical twist. Under the supervision of Mrs. Hoo, the owl teacher at reindeer school, Rudy the mischievous reindeer knows he is a little different. That is until Rudy meets the Jazz Penguin who introduces him to the delights of jazz and shows that it is acceptable to be unconventional. Rudy sets about his journey of musical discovery and his true calling, culminating in his ability to see the northern lights, a sign that he has finally got “the Jazz”.

It is a children’s show aimed at three-year-olds and above but there is something for everyone. The jazz musical education starts from simple drum rhythms to a cheerful and upbeat trumpet tune, moving on to melancholic blues and some beatboxing and improvisational work. It is jazz at its most easy going but perfect as an introduction. Each of the cast of three plays multiple instruments and although one short of a quartet, a well disguised electric keyboard is there to make up the numbers when required. The vast array of instruments on show is an inspiration itself. Together, the vocals of Wendy Pave, Dan Bottomley’s cheeky portrayal of Rudy and his guitar playing, and the masterful trumpeter Claude Deppa make a contrasting and dynamic trio.

The well considered script by Matt Borgatti deals with various idiosyncrasies of the animal characters such as the hoofed Rudy and the washed up/beached diva-like walrus Nina. There are inevitably some groan inducing puns but nothing less should be expected from a Christmas show. Directed by Andrew Barry and designed by Katie Scott, there is some inspired staging, especially the realisation of the northern lights which has the magical, transient quality of the real thing.

At 50 minutes, along with a set of suitable and well controlled audience participatory materials, it is a treat for youngsters and adults alike. It is great to see jazz music introduced to a younger audience and hopefully it will be an inspiration to some.