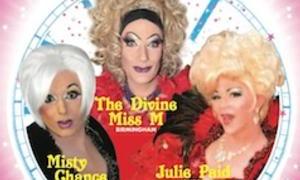 Jokes on balls, nuts, and 69 or rather 68 with a cast of six men in the show Sinderfella, it can only be a pantomime, an adult pantomime to be precise. The show comes with the warning: “not suitable for children, faint-hearted and persons of a prudish nature” just to be sure no one walks in mistaking it for a production of Hamlet. Fret not, it is in reality tamer than the warning suggests, but it is undoubtedly great fun and a bit rude.

This pantomime is a version of the story Cinderella and because the original Cinderella is unavailable for the night, the hostess Divine Miss M is drafted as Cinderella. After being transformed into Cinderella by the fairy godmother while singing Pure Imagination, the show is ready. The object of her affection is Prince Donkey Dick of Soho, never without his 12 inch phallic implement down the side of his leg. Buttons and the ugly sisters make their appearances and the rest of the show is best left to your imagination. But one scene that has to be noted is where Cinderella’s wish only comes true if she rubs a vibrator up and down three times.

The action is supported by a host of classic songs such as It’s Raining Men, Amarillo and the more up-to-date What Makes You Beautiful from One Direction, all performed with well choreographed dancing by Christopher Goldring and Nicholas Devlin. A mass singalong of Be Our Guest is a particular highlight. Jokes are typically lame and dirty but appropriate for the context, mostly delivered with a knowing groan by the ugly sisters Gaga (Simon Gross) and Rihanna (Joe Meloy). Although their chat with the audience veers slightly off and takes on a racist slant, it is all in good spirits and just about acceptable.

The cast is game and the imposing stature of Divine Miss M, especially in her six inch platforms, is a great source of comedy. Especially when opposite the five foot two Michael Lapham playing the smitten and delightful Buttons. Joe Meloy is funny and has a good rapport with the audience as the fairy godmother. The array of costumes is impressive and some homemade props manage to be both economical and comical. It is not the slickest production there is but the few glitches on the evening only add to the comedy and its charm.

Be prepared to let go and join in, sing and dance along or even be dragged up onto the stage. If approached with the right attitude, it is a great evening of adult pantomime to light up the dark, windy winter evening.