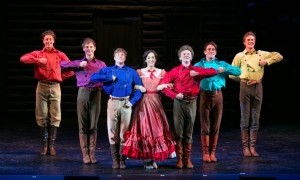 This much loved musical film from 1954, now revived as a touring production, tells the story of Adam (Sam Attwater) the eldest of seven brothers who marries a feisty and resourceful Milly (Helena Blackman). Only after the marriage does she find out she has to deal with Adam’s six unruly brothers; Milly pulls up her bootstraps and teaches them manners and how to treat a lady, eventually landing a bride for each.

The plot is quite straightforward but to focus on it is missing the point. This is a fun and

wholesome show which at times may be a little preachy, yet

it is a show filled with big dance set pieces with a stage full of dancers and singers giving an enthusiastic and energetic performance. The start of act two is possibly where it is the weakest with a slight dip in energy, mirroring the onset of winter in the story, but it soon gives way to more big dance numbers to impress and entertain.

Musically, there isn’t too much of a surprise it being mostly pleasant and perfectly jolly. The singing is competent with both Attwater, with his cheering fans in the audience, and Blackman perfectly capable of belting out those catchy tunes. The highlight in the first half is Love Never Goes Away as a trio between Adam, Milly and Gideon, played by the likeable Jack Greaves. The second act is mostly ensemble dance and musical set pieces interspersed with numbers from Adam and Milly.

The dancing in the show is full of energy and great athletic and gymnastic abilities are on display. Directed and Choreographed by Patti Colombo, it really shows the strength of the dancing capabilities of the cast. The end result is tight, well-drilled and exciting to watch. Also, the brothers’ muscular and athletically toned bodies give the opportunity for the show to fit in a few topless scenes, giving an added element to those who enjoys these delights. There really is something for everyone here.

For the production design, the backdrop of a snow cap mountain and a few flats of forests and houses effectively give depth and perspective to the scenery. There are a few technical issues with the set but this is completely understandable for a touring production and they actually generated a few laughs.

If an evening of entertaining, cheerful and undemanding theatre, filled with well choreographed and likeable tunes is what you are looking for, this is a great show to catch in Wimbledon or elsewhere as it tours.