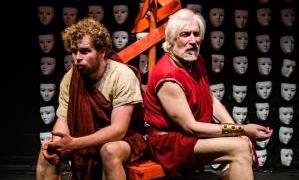 This is a double bill of Oedipus The King, a rewrite by Jeremy Kingston of Sophocles’ classic tragedy and Oedipus At The Crossroads, an original work written as a response to the original story.

Oedipus The King is as told by Sophocles but with updated dialogue and clarification of some of the settings. The story remains with the tragic prophecy foretelling Oedipus slaying his father and marrying and having children with his mother which drives him away to Thebes, to be as far away from his parents as possible.

With actors in modern dress, the use of modern vocabulary and the maintenance of a degree of classical text structure works well for the storytelling. The direction by Robert Gillespie provides tight and absorbing drama and is mostly successful in reining in the melodrama, barring the occasional slips and rough edges. The array of back lit theatre mask as a backdrop reminds us of the origins of the play and is also useful for the occasional lighting effect.

Tom Shepherd as Oedipus has the perfect youthful hot headedness and quick temper while gaining thoughtfulness and maturity as the truth unfolds. There is good support from the ensemble cast, especially Judi Scott for her stamina as Citizen 1 on stage for the whole duration with a tortured and pained expression as the tragedy unfolds.

While Oedipus The King is a classical piece of drama, Oedipus At The Crossroads takes a different direction. Reverting back to period clothing, it expands on the section in Oedipus The King of the account where Oedipus kills King Laius at the crossroads. As Oedipus strolls down the sacred mountain after hearing the prophecy of his acts on his parents, he comes across King Laius. Once they have established their true relationship as father and son, the play looks to speculate how the improbable outcome of Oedipus marrying a woman who is possibly his mother’s age could still come true after learning the prophecy.

This work by Kingston is in some ways a clever and witty version of an after show discussion. It pokes at all the plot holes and the improbable chain of events in Oedipus and provides a logical and satisfactory conclusion. There is no shortage of humour to mock this ridiculous scenario. Yet it provides some thoughtful points about control over people with the use of religion as a political tool. And a particular paradox of choosing between the accuracy of the prophecy, hence the credibility of the church and sacrificing one’s life in order to preserve it is particularly gratifying. It may be a little too clever and knowing for some, but it works well as a double bill.

The same cast takes on similar roles and some role crossovers highlight the points made by the play. Tom Shepherd continues as Oedipus but with a sense of humour and more humility. He is an altogether different Oedipus from the previous play and perfectly in line with the text. Jack Klaff as Laius may be physically a little stiff, but he has the perfect voice for the role. Richard Earthy as the scheming Tiresias is suitably chilling.

The first play may be a bit heavy going at first and a long evening at nearly three hours. But it is well worth seeing both together to have the freshness and contrast of Oedipus to fully appreciate Oedipus At The Crossroads.