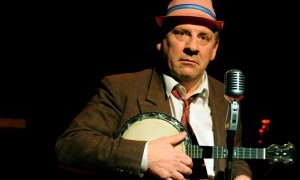 Set in 1957, Derek Eveleigh is an alcoholic ex-policeman who was dismissed from the force because of his drinking. Now a struggling photographer, he is hired by a mysterious benefactor to follow and photograph an attractive woman around Holland Park. That is until a murder takes place one day and Derek becomes involved in this crime thriller noir.

Simon Slater is the star of this one man show as he plays the downtrodden but amiable Derek, who has been revitalised and driven by the combination of a beautiful woman and money. Slater also plays a mix of exclusively male characters such as an ukulele playing Irish comic, an American saxophonist and a Russian owner and resident magician of a club. While being an engaging and energetic storyteller, all these roles showcase Slater’s acting ability and his talent with voices, accents and even musical skills.

It seems the writer Douglas Post has deliberately created all this unnecessary diverse set of characters solely for the purpose of showing off Slater’s skills and it feels contrived as a result. The overall story is logically sound but not particularly surprising with elements of the story predictably cliche. It is difficult to see why it should be a staged play as it will do just as well as a radio play.

Despite the shortcomings of the play itself, credit must also go to the director Patrick Sandford in creating a generally entertaining and occasionally tense production. Its pace is set high and Slater’s transition between characters is well handled. The sparing use of projection provides a perfect outlet to a potentially claustrophobic space. And those showing photographs of the young woman being followed are particularly emotive. The lighting, music and the period in which the play is set mean there is no mistaking it for anything but a crime thriller noir.

It is difficult to judge this production overall as the great work by Slater and Sandford is immensely enjoyable, despite the jarring shortcomings of the writing. It is best to treat this play as a popcorn movie to be seen as a pure entertainment. And from that point of view, it is a hugely pleasurable and entertaining evening at the theatre.