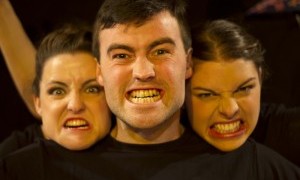 Comprising five Arabian Nights stories condensed into an hour long show, the main story tells of a prince who marries a woman every day and executes her soon after as he exacts revenge on women because his first wife cheated on him. The heroine Scheherazade takes up the challenge of becoming his wife and convincing him not to execute her with the help of her storytelling, weaving the five stories within the main narrative as in the original tale. The more well-known Sinbad is present in the story, along with the more inventive, non-standard philosophical crab with a French accent and a strutting cock prone to occasional domestic violence.

It is a mixed bag of characters as is the writing itself which is sometimes rough and ready. It has the odd cringeworthy line with some occasionally silly humour which gives the production a school play vibe. But the quality acting helps to remind us there is a degree of professionalism here, notably the nimble and engaging Kate Millest playing the upbeat Scheherazade and a particularly nasty genie.

The story within a story structure is at times confusing especially when the stories switch back and forth. It is a credit to the actors that they keep the characters distinguishable. The unevenness means the show drifts from funny and enjoyable moments to passages of incoherence as the story loses itself within another story. Luckily, these are momentary lapses and the narrative soon finds its anchor point again, back with the storytelling Scheherazade. The action is enhanced by the subtle accompanying music of George Mackenzie-Lowe and some amusing sound effects.

This show bridges the gap between a conventional play and the seasonal pantomime. As long as you can look past the flaws, it is a perfectly serviceable night of theatre.