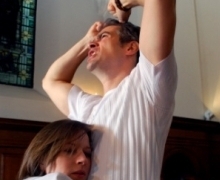 The staging of Messiah can sometimes be an uninspiring affair: choir, singers and anything up to a full orchestra crammed onto a stage singing to their hearts’ content. This may deliver an outstanding musical performance, but it is not hugely inspiring in terms of a visual performance. In this refreshingly pared down production of Messiah by Merry Opera, twelve singers are accompanied by the organ. It has a much appreciated lightness injected into it and the lightness does not only apply to the numbers of performers on stage. Speaking of performers on stage, the number is further reduced since part of the action takes place around the auditorium giving an encompassing sound to the chorus despite the numbers.

The premise of this production has the performers congregating in the church as initial strangers, each with his or her own despair and seeking solace. The story of Messiah is morphed into metaphorical birth, death and resurrection and coming together at the end to the celebratory Worthy Of The Lamb and Amen.

Apart from the inventive staging, there are little directorial touches by John Ramster which elevate this production: from the performers mingling with the audience around the auditorium to the twirling in the aisle for the trilling parts of the music. The twirling trills add directional as well as the tonal alteration to the trillings and these small gestures add to the performance giving it variety. One small complaint is that with all the movements, it can be a little distracting at times and detracts from the music.

In terms of performance, there is certainly individuality in the singers. Taking the sopranos for example, each has her own distinctive style where Larissa Blackshaw is powerful and has a great carry if a little too strong; Daisy Brown has a beautiful, naturalistic voice and Lucy Goddard’s voice is softer but no less powerful. However, when put together under the musical direction of Stephen Hose, their voices complement each other and this also applies to the whole ensemble when the performance is at its strongest. Individually, the performers are good but not spectacular; together, especially with some of the ensemble pieces sung around the auditorium, the individuality adds to the layering of the music and envelopes the audience.

St John’s Smith Square is a great venue acoustically and it shows through the chorus parts of the music. It is however a little too large for individual performances where the singing is sometimes lost amongst the pillars and the organ. This is not to say this is not an interesting and entertaining staging of a much loved but sometimes considered too formal an oratorio. This production gives it a new twist and variety.