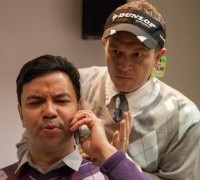 Site specific theatre, powered by bike and set in a giant cheese is the tagline of the play. There are a few concepts here which need elaborating. The easiest to explain is the bike powered part, where the production sought the local gym and community to charge the battery providing electricity for the show. There are a couple of power outages in the first act but that is not a big issue as the actors manage to deal with them quite well. But otherwise, it is not featured in the show at all. Then comes the site specific part with the performance space being on the first floor of an office building. The audience is greeted by the actors as guests of a company going out of business party. Everyone has a name tag but the limited interaction ends as soon as the play starts. So that is that.

Then comes the play and the cheese is used as a representation of various ills that the play tries to satirise and highlight. The play, written by Nikki Schreiber, began as a set of office party skits with a vague narrative linking the characters. The first consists of innuendos about fondue making, then the next moves on to an explanation on the modern monetary system in a light-hearted way. It touches on profit generation from non-existent assets, the obsession with accumulation and other such modern capitalist pursuits. It also incorporates a skit which pokes fun at a Nigella Lawson type cookery programme which although funny, feels out of place. At least this first section is entertaining with its low-fi office equipment as props and its attempt at a “charming theatre goes wrong” act.

Once the play shifts into a more serious look at the casino culture of banking and reenacts an extended version of the Milgram experiment, the play grinds to a halt. Similar messages continue to repeat themselves and though there is some merit in the attempt to simplify and summarise each point it tries to make, the lack of narrative and continuity makes it tedious to watch. The ending couldn’t come soon enough but even that drags on with the final dialog which could have been trimmed to a third of what it is. And there is no escape as the exit is right by the performance area.

The set that keeps on revealing certainly provides some distraction and the final act is purging, if only as a celebratory gesture for the end of the play. There is no complaint about the actors as they do a good job and incorporate all the challenges of the production well. This production by fanSHEN is a brave and ambitious project which tries to tackle many elements but unfortunately fails the basics of having a good play to work with. The frills on the side feel like the play is trying hard to distract the audience from finding out its fundamental flaws but this is clear to see.